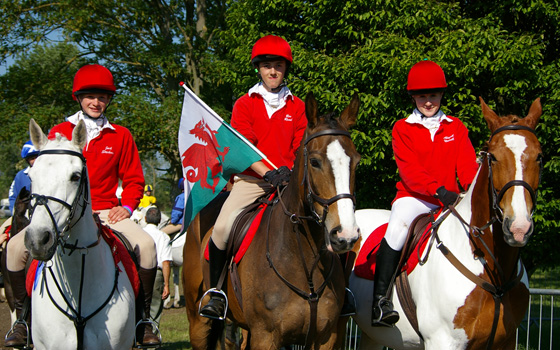 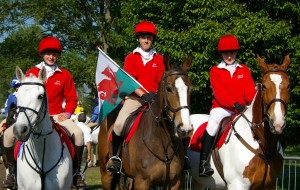 It was with equal measures of nerves and excitement that we set off for the long trip to Windsor Horse Show from North Wales on Friday 16th May. Ben couldn’t wait to meet his fellow two team mates in the Wales & Borders Team, Jack Stephens (Area 10) and Abigail Worral (Area 18) for the Pony Club Tetrathlon competition. The hot & sunny weather was perfect and the show ground looked immaculate. Within minutes of arriving we met up with Jack & Abigail and located Dougal’s stable for the weekend, just a few metres away from the main arenas with horses of every shape and size passing the door.  All the tetrathlon competitors were stabled close together so we were soon making new friends with those from Scotland, Ireland and the five regions of England (8 teams in total).

On Saturday morning, we all gathered for a briefing at Windsor Leisure Centre before heading for the pool. With only three competitors in each team all scores counted, so the pressure was on. Swimming is Abigail’s favourite event and she did not disappoint with the best swim of all 24 competitors – a whopping 10.5 lengths in 3 mins! All the Welsh Team swam PBs which put us in 4th place after the first event and we headed back to prepare for the shoot in a marquee on the showground.  The Windsor Show security was not quite sure what to make of parents carrying pistols but let us all back in without too much delay! There were quite a few shaking arms during the shoot, particularly when word came that the Queen was being driven past the marquee.  The W&B Team put in a solid performance retaining 4th position after the two events. The run was next, right along the bank of the river Thames in what was still glorious sunshine. Running is Jack’s favourite event he put in a tremendous performance to claim the best run of all competitors – 4 mins 50s for 1500m!  Ben & Abigail also had fast runs and this great team effort put W&B up into 3rd place at the end of three events.

Sunday morning saw polishing & plaiting of horses, cleaning of tack & boots etc. to ensure everyone looked immaculate by lunchtime. The Welsh Team sported red dragons on their horse’s bottoms and everyone gathered outside the BHS Arena to warm up and walk the course. Dougal was on his toes, Abigail was on a borrowed horse and Jack was currently in individual 1st place so all the W&B Team were very anxious about the ride, particularly given the relatively large number of points available. They were the penultimate team to go in and with relatively few clear rounds being achieved they had to control their nerves and focus on the task. Ben was first team member to go – would Dougal react to the crowds? was a 16.2h horse such a good idea when you have to remount half way around? Well, Ben & Dougal did Area 5 proud with a lovely clear inside the rather tight time allowance and Jack & Abigail picked up just a few penalties, resulting in W&B climbing to a well deserved 2nd overall (just behind Scotland) and Jack retaining his 1st place overall. The team looked deservedly proud of themselves as they paraded in the main arena with all the other tetrathlon competitors in front of the Royal Box to round off a truly memorable experience.