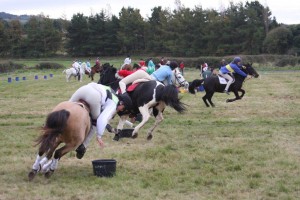 On Sunday 6 February 2011 Pony club Headquarters with Flint and Denbigh Pony Club organised a study day for mounted games.  The aim was to help all those already involved in the day to improve their understanding, and to give encouragement to those thinking of becoming involved.

The day was held at Northop College near Mold and Marion Harding from HQ came up to host the event.  Flint and Denbigh PC provided three team, two senior teams and one junior.  The day began with a tack check, which Marion explained in detail, clarifying what was required at competition level.  She then invited people who had never stewarded at a competition to be mentored by experienced stewards.

The two senior teams ran the 2011 games against each other, incorporating deliberate mistakes for the rookie stewards to pick up and learn to board.  The experienced stewards stood with them and explained the rules and why they were being boarded, which means if a team does anything wrong, the stewards watching that lane on the line and at the bottom put up their board until it is corrected.  It was pointed out that riders must not rely on boarding but must be aware of their own mistakes and correct if necessary, as if a steward fails to raise their board it is no excuse for not correcting mistakes.

Marion kept up on commentary throughout for the audience, and during the break they were invited to ask questions.  After the break the session was repeated with the juniors.

There was an excellent turn out and a few new clubs who have not previously been represented at Pony Club mounted games attended and were full of enthusiasm to become involved in this exciting discipline.  For more details on PC Mounted Games go to www.pcuk.org 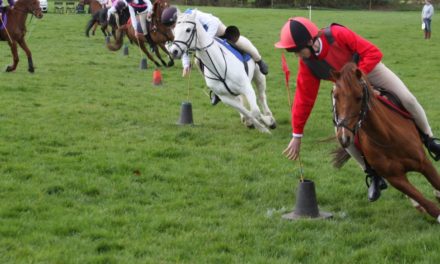